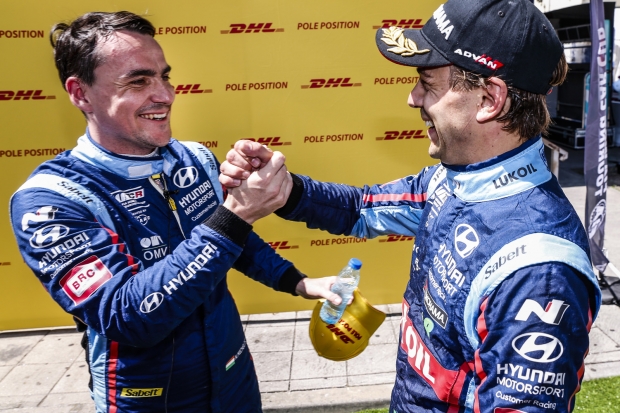 The BRC Hyundai N Squadra Corse driver led all the way from the DHL Pole Position to claim his second win of the season and close the gap to Guerrieri to just 15 points on the #RoadToMalaysia.

Although Michelisz had the pace to win on merit, he was also aided in his quest by Augusto Farfus in the sister BRC Hyundai N LUKOIL Racing Team entry. The Brazilian, who had qualified second, held back the pair’s nearest challengers, Yann Ehrlacher and Rob Huff, to allow Michelisz to open up a gap at the front following a clean start.

“After qualifying I knew I had the car to win,” said Michelisz. “But I have to thank Augusto who helped in a nice and clever way. Then I just had to manage the gap. I’m happy with the win and, of course, the points.”

Michelisz, Farfus and Huff took their joker laps – a feature unique to the 4.785-kilometre Circuito Internacional de Vila Real in WTCR / OSCARO – as early as possible at the end of lap three, but Ehrlacher waited a lap later – and it enabled the Frenchman to jump Farfus to claim second place.

But with Michelisz already clear in the lead, the Cyan Performance Lynk & Co driver had no chance to challenge for victory and finished second, 2.291s behind. Farfus completed the podium, with Huff in fourth for SLR VW Motorsport.

As Farfus had ahead of him, team-mate Nicky Catsburg held up the rest of the field in the opening stages while running fifth. He maintained his position after the joker laps had played out to secure more points for the Hyundai N LUKOIL Racing Team.

Comtoyou DHL Team CUPRA Racing’s Aurélien Panis finished sixth ahead of SLR Volkswagen’s Johan Kristoffersson, who used his experience from the FIA World Rallycross Championship to take his joker later in the race than his rivals. On this occasion it didn’t work out for the Swede, who neither gained nor lost a position and he finished seventh, just ahead of Thed Björk. Yvan Muller and Jean-Karl Vernay completed the top 10 at WTCR Race of Portugal.

ALL-INKL.COM Münnich Motorsport’s Néstor Girolami finished in P11, just ahead of Andy Priaulx, PWR Racing’s Mikel Azcona and Team Mulsanne’s Ma Qinghua, who made a slow start from fifth on the grid and immediately dropped down the order in his Alfa Romeo Giulietta Veloce TCR. Comtoyou Team Audi Sport’s Niels Langeveld was the final points scorer in P15.

The race proved an unhappy one for #RoadToMalaysia points leader Guerrieri. The ALL-INKL.COM Münnich Motorsport driver only started P16 after a sensor problem in qualifying, then endured a misfire in the race – allowing Michelisz to close that gap to 15 points from 45.

Home hero Tiago Monteiro was in a points-paying position when a collision with Gabriele Tarquini – who was rejoining the track at the time after completing his ‘joker’ lap – put him out on lap four.