Norbert Michelisz was among the points scorers 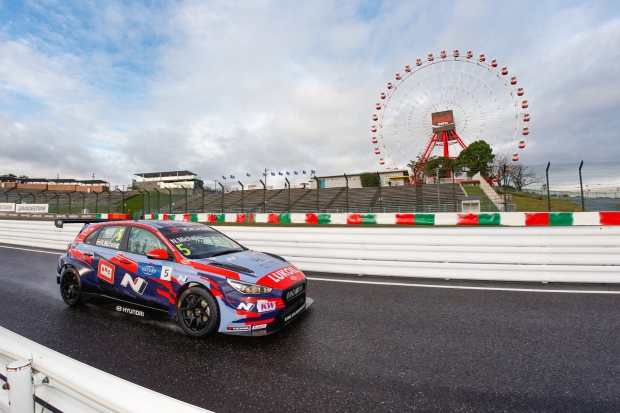 Esteban Guerrieri claimed the points lead of the WTCR – FIA World Touring Car Cup presented by OSCARO with a strong win from the DHL Pole Position in Race 1 at WTCR JVCKENWOOD Race of Japan.

“It is one of my best victories I’ve ever had,” said a delighted Guerrieri. “It is important for many reasons. Thank you to everyone involved in this project.”

At the start, Comtoyou Team Audi Sport’s Frédéric Vervisch challenged Guerrieri for the lead on the outside of Turns 1 and 2, which allowed team-mate Langeveld up the inside to take the lead. But on lap two the Dutch driver made a mistake at the final turn, which allowed Guerrieri to take a lead he would not lose.

“It was intense,” said the race winner. “The Audis were lighter and quicker on the straight. After the start I touched wheels with Vervisch, but the Honda is like a tractor and so reliable! Langeveld got inside and took the lead, but then made a mistake. From there I had the pace to control the race.”

There was bad luck for Vervisch, who lost his third place on lap seven with a puncture which triggered a safety car interlude. The racing action resumed on lap 10 with Guerrieri leading from Langeveld, ahead of Monteiro – who had started fourth rather than from the DHL Pole Position as one of a number of driver to incur a grid penalty after qualifying.

On lap 14 there was further Audi misfortune as impressive ‘wildcard’ entrant Ritomo Miyata  dropped out of seventh place in his Audi Team Hitotsuyama Ritomo RS 3 LMS with a technical problem.

The race ended under the safety car following a high-speed crash involving Andy Priaulx. The Cyan Performance Lynk & Co driver, running in P13 was defending into Turn 1 from BRC Hyundai N LUKOIL Racing Team’s Nicky Catsburg. The Hyundai i30 N TCR made contact with the Lynk & Co, with Priaulx shooting across the gravel trap and hard into the barrier. “He fired me off,” said an unhappy Priaulx on the radio.

#ROADTOMALAYSIA title contenders Yvan Muller and Norbert Michelisz were also among the points scorers. Muller rose from 25th on the grid to finish in P11 ahead of team-mate Yann Ehrlacher. Michelisz lost his WTCR OSCARO title lead in P13, ahead of Catsburg and final points scorer Aurélien Panis.