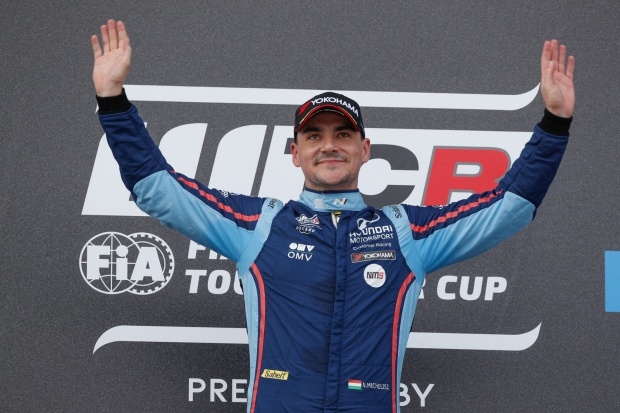 Norbert Michelisz grabbed back the advantage in the WTCR – FIA World Touring Car Cup presented by OSCARO title chase with victory in a frantic reverse-grid Race 2 at WTCR JVCKENWOOD Race of Japan.

The BRC Hyundai N Squadra Corse driver started from the DHL Pole Position and robustly defended his lead from fellow front-row starter Rob Huff off the line, then led the SLR VW Motorsport driver for the rest of the 24 laps around the 2.243-kilometre Suzuka Circuit East Course circuit. Huff was always within range of making a move, but Michelisz never gave the Briton a chance to pass.

“Fantastic,” said the Hungarian, who now leads Race 1 winner Esteban Guerrieri by six points in the #RoadToMalaysia, destination of the season-deciding super-finale in December. “The race was very difficult. I tried to build a gap in the beginning and saw Rob falling back. But he has a great approach, saved his tyres and came back at me. That was 24 qualifying laps for me, I was on the limit.

“The only approach is to go flat out and I’m very happy with my performance. Points are important when I can take them. My approach for Race 3 will be the same. Starting P10, I need to go for points.”

The only shadow on Michelisz’s race was being shown the black and white flag for driving standards after moving far to the right off the line and into the pitlane exit to defend his lead from Huff.

“It was quite hot with Kevin,” admitted Tarquini. “He was the fastest driver in the race.”

Thed Björk held of Tiago Monteiro, Johan Kristoffersson and Mikel Azcona for fourth, while Jean-Karl Vernay rose from P13 on the grid to finish ninth. Guerrieri, who started the race sixth, slipped back to P10, banking safe points for the title and avoiding the risk of an incident.