P12 in the second qualifying after a crash 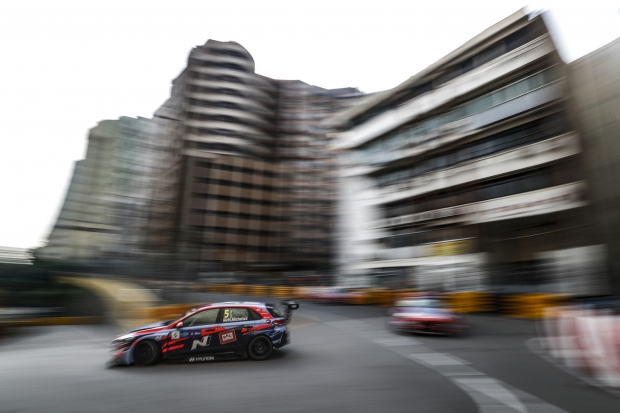 Rob Huff has taken his ninth Macau pole with a sensational lap in the DHL Second Qualifying Q3 shootout this afternoon for his first top spot of the 2019 WTCR – FIA World Touring Car Cup presented by OSCARO.

Esteban Guerrieri, leader of the WTCR – FIA World Touring Car Cup presented by OSCARO ahead of the Macau Grand Prix weekend, ended up P10 in Second Qualifying Q2 and is set to start Race 2 from the partially-reversed grid as a result in his ALL-INKL.COM Münnich Motorsport Honda Civic Type R TCR.

But while Guerrieri made it through to Q2, his title rival on the #RoadToMalaysia – where the 2019 title will be decided next month – Norbert Michelisz, crashed out of Q1 when he collided with Gordon Shedden’s stricken Audi RS 3 LMS at Moorish corner.

Although Michelisz’s fourth-fastest time was quick enough to allow him to progress to Q2, hefty damage to the front of his BRC Hyundai i30 N TCR was too severe for the Hungarian to go any further in the session.

Huff’s performance, meanwhile, gives him the DHL Pole Position for Race 3 on Sunday when he will chase a record-extending 10th victory on the legendary 6.12-kilometre Circuito da Guia.

“It’s about time,” said Huff. “If it was going to happen it was hopefully going to happen here. This morning we discovered we had a broken damper and that’s why we were where we were. We had high hopes after [topping practice] yesterday. But I think I did probably two of the best laps I’ve ever done of Macau.”

Priaulx said: “It was a really good lap. I lost the rear going into Dona Maria and it was enough to put me on the back foot. I don’t think there’s much more I could have done.”

Huff’s Q2 lap of 2m27.963s, which ensured a shot at the DHL Pole Position, was comfortably under his pre-event qualifying lap record of 2m29.040s and more than made up for his frustrating First Qualifying effort this morning, when he ended up seventh quickest behind poleman Yvan Muller (Cyan Racing Lynk & Co).

Muller was denied a place in Q3 in Second Qualifying by just 0.015s and is set to start Race 3 from sixth, ahead of the Team Mulsanne Alfa Romeo Giulietta Veloce TCR of Kevin Ceccon and Muller’s fellow Lynk & Co-powered drivers Thed Björk and Yann Ehrlacher.

Gabriele Tarquini ended up P11 following a tough session for BRC Hyundai N Squadra Corse, the Italian’s passage in Q1 blocked by the incident that eliminated team-mate Michelisz, who was second fastest in First Qualifying ahead of Priaulx. Although he was unable to take part in Q2, Michelisz is set to start Races 2 and 3 in P12.

PWR Racing’s Robert Dahlgren was P21 on his WTCR / OSCARO debut, his bid to progress to Q2 not helped by contact with wildcard Jim Ka To from Hong Kong entering the Fisherman’s right-hander. Dahlgren’s team-mate Mikel Azcona had high hopes of a strong Second Qualifying after going P10 in First Qualifying, but hefty contact with the safety barriers at Lisboa Corner left his CUPRA TCR too badly damaged to set a meaningful time.

Benjamin Leuchter damaged the front-right of his Volkswagen Golf GTI TCR and ended up P25. Billy Lo was the fastest wildcard in P27.