Norbert Michelisz finishes as the top Honda in the standings 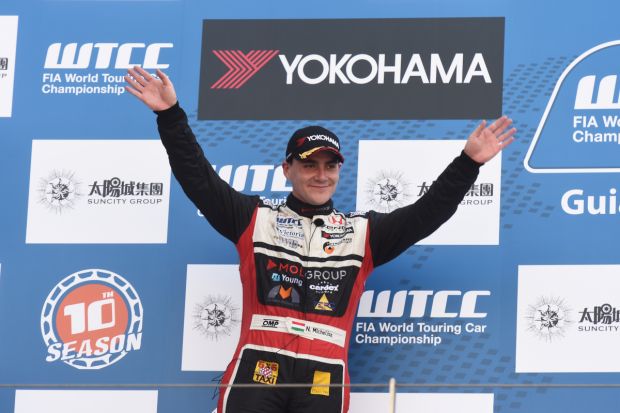 Zengõ Motorsport's Norbert Michelisz leaves the Guia Race of Macau fourth in the drivers' championship, moving ahead of the factory Honda of Tiago Monteiro in the championship after the Portuguese driver's race two DNF, after Michelisz took a strong second place in the first race, finishing behind the Citroën of 2014 champion José María López.

The 30-year-old Hungarian launched up to second at the start of race one from fourth on the grid, ahead of the two Citroëns of Sébastien Loeb and Yvan Muller, and was able to defend against Loeb into Lisboa, with the Frenchman falling back behind the works Hondas, who shadowed Michelisz throughout the rest of the race.

With fourth from seventh on the grid in race two, Michelisz moved into a clear fourth place in the drivers' standings with 201 points, 15 ahead of Monteiro and 94 behind the Citroën of Sébastien Loeb.

"Before the weekend I was dreaming of such as a result," said Michelisz. "My target was to score points, and after qualifying I knew that I had to make a perfect start to get on the podium, and luckily I was able to do that. The first two or three laps were difficult in the first race, as Sébastien was attacking me quite hard, and he was very fast in the straight, but fortunately he was not able to get the inside line at Lisboa. Then after than with the same cars behind it was easier to manage the gap.

"The second race was a little bit more tough as the car was not working at all, especially in the middle sector, but it didn't make any difference if I finished third or fourth, as I would still have finished 'best of the rest' after Citroën which was my target before the weekend."