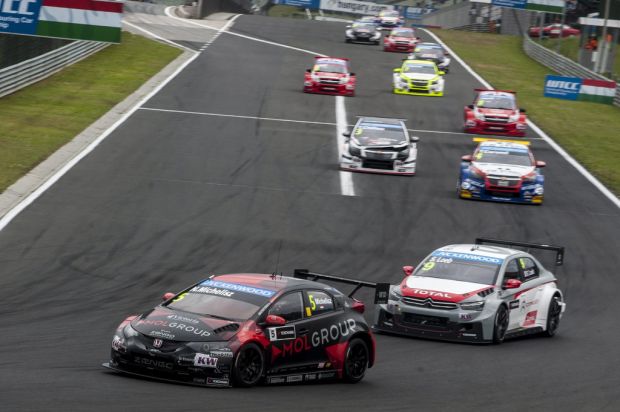 Coming home for the most important race: Norbert Michelisz and the MOL Group Zengő Motorsport team will be chasing glory on home soil this weekend as the FIA World Touring Car Championships heads to Hungary for rounds 5 and 6 of the 2015 racing season.

Budapest's Hungaroring will be the place to be once again for thousands of Hungarian fans who in recent years have created a thrilling atmosphere second to none. So the pressure is on for Norbert and the Zengő Motorsport team but they will not let that distract them from trying to shine on race-day.

Norbert, driving the No. 5 Honda Civic, has been a regular podium finisher at the Hungaroring, coming home in second place in 2011 and in 2013. His best result at his home race, however, was taking an emotional victory in 2012, making more than 50,000 fans on the grandstands go crazy with joy. Norbert also has scored two class wins in the Yokohama Driver's Trophy so far and will try to further improve his home record this weekend, always counting on the support of his fans.

"I cannot wait to race in front of my home crowd again", he says. "Although we were not able to score a podium finish in the first two race weekends of the 2015 FIA WTCC season we are confident ahead of the races on the Hungaroring." And Honda will make sure that Norbert has everything he needs to once again shine in front of packed grandstands: The 2015 Honda Civic WTCC has evolved a lot and will feature the latest development package to boost overall performance. Therefore, Norbert is positive about his chances on home soil: "With the new parts on the car we can hopefully improve our pace and fight for a race victory."

For the first time this season, the Compensation Weight rules will be imposed on the competitors. According to this, the all-dominating Citroën C-Eylsée cars will run with additional 60 kg which should enable Norbert and his fellow Honda drivers to take on the leading drivers in the World Championship standings, especially considering the twisty nature of the 4.3 km Hungaroring. With several slow corners and a tight chicane, car weight will prove to be an issue for the Citroën drivers and will result in less traction and slower acceleration which in turn could create opportunities for those chasing them. And one thing is for sure: Norbert and the MOL Group Zengő Motorsport team will try their very best!