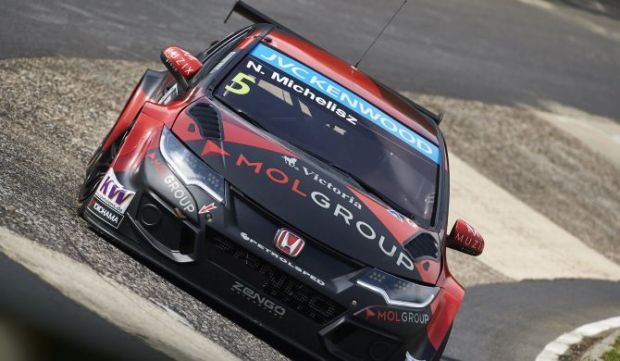 The Nürburgring-Nordschleife poses the biggest challenge of the 2015 FIA WTCC season. But Norbert Michelisz and the MOL Group Zengő Motorsport team successfully managed to tame the "Green Hell" in their debut at the world-famous venue with the No. 5 Honda Civic WTCC taking the flag in fourth after three intense laps around the German race track, once again as the leading Honda driver in the field.

The second race, however, ended in frustration for the team as Norbert had to retire with a damaged car. But the solid points haul from race one sees the Hungarian driver in the lead of the Yokohama Drivers' Trophy after all.

"First of all I would like to say that I enjoyed every moment driving on this track. It was really special, the amount of adrenaline you have on this circuit is just amazing and the support has been great", Norbert says after the inaugural WTCC race weekend at the infamous Nordschleife. "Unfortunately, we were a bit unlucky in both races. Because in the first race from fourth on the grid I focused on my start and got a good one but was pushed wide by a competitor. This damaged the steering of my car, meaning it was not at 100% anymore. So I had to settle for fourth in the end."

With a lot of points in the bag already Norbert and his team were aiming for another top 10 result. But that did not happen for the Hungarian outfit. Norbert explains why his race was over after just a few corners: "My start was quite good and I managed to gain some places but I suffered with contact and as a result of too much damage at the rear suspension, retired from the race."