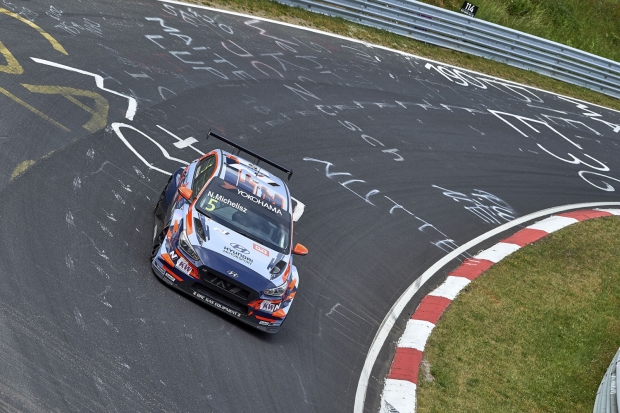 Benjamin Leuchter claimed his first win in the WTCR – FIA World Touring Car Cup presented by OSCARO after leading Race 3 almost all the way from the DHL Pole Position at WTCR Race of Germany.

The German fended off a strong start from #ROADTOMALAYSIA points leader Esteban Guerrieri at Turn 1, then controlled the pace brilliantly from the front to score a landmark victory in his SLR Volkswagen Golf GTI TCR.

“It’s difficult to describe, I’m out of control,” said an overjoyed Leuchter. “It means so much to me. My whole life is connected to this track. Everything I have done, I have done here. To win a WTCR race against these unbelievable drivers... I’m so happy.”

Guerrieri made a flying start from the second row, despite a fluid leak on the grid and a slow getaway on the warm-up lap, making the most of the gap where non-starter Rob Huff shouldn’t have been beside Leuchter. The Argentinian briefly took the lead into Turn 1, but the Golf had a better line out of Turn 2.

At the end of lap one, Guerrieri got a strong run on Leuchter on Döttinger Hohe and almost drafted into the lead, but the home hero just clung on after some fantastic dicing. “I almost lost it there and we made contact,” said Leuchter, “but maybe it was the hand of God that saved me.”

The moment allowed Comtoyou Team Audi Sport’s Frédéric Vervisch, up from seventh on the grid, to get a run on Geurrieri and the Belgian passed the points leader on the start-finish straight to claim another second place, following his runner-up finish in Race 2. Guerrieri would settle for third, consolidating his points lead over main title rivals Norbert Michelisz and Thed Björk, who both failed to finish this race.

The action came thick and fast from the start. At Turn 1, Race 2 winner Johan Kristoffersson and fellow Golf driver Mehdi Bennani made contact, while Tiago Monteiro was spun around by Augusto Farfus. Monteiro would finish in P7, while Farfus retired to the pits, as did Björk after contact with Lynk & Co team-mate Andy Priaulx. Michelisz was out with damage caused by an incident with the fast-starting Vervisch.

Another first lap casualty was Attila Tassi, who pulled his steaming KCMG Honda off on to the grass while running fourth. Then on lap two, there was drama for Kristoffersson when he crashed heavily after an incident with Yvan Muller.

At the front, Jean-Karl Vernay pulled his Leopard Racing Team Audi Sport RS 3 LMS up from P15 on the grid to run just behind the top three. A top-four shootout looked on the cards for the dash to the line, but the cars were too strung out for Vernay to further improve his position.

Gabriele Tarquini finished fifth after his fourth place in Race 2, ahead of Tom Coronel, who enjoyed his most competitive showing of the season for Comtoyou DHL Team CUPRA Racing. He finished just ahead of team-mate Aurélien Panis, from Nicky Catsburg, Gordon Shedden and Muller, making it six customer racing brands in the top 10.