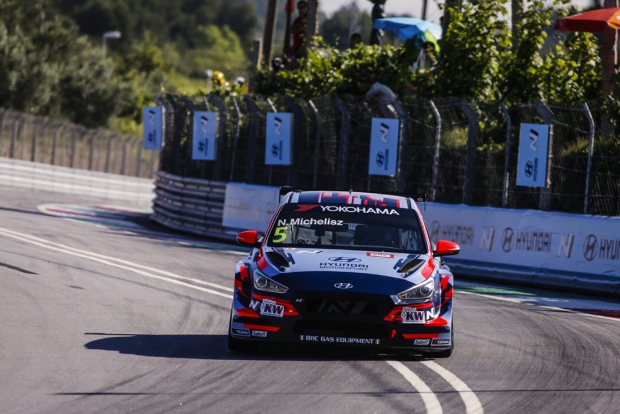 Norbert Michelisz claimed the DHL Pole Position for Race 1 at WTCR Race of Portugal after setting a scintillating pace in qualifying on the Vila Real street circuit.

The BRC Hyundai N Squadra Corse driver headed the 40-minute session early on only to be knocked from the top spot by SLR VW Motorsport’s Rob Huff. But then Michelisz set a new qualifying lap record of 2m59.498s around the 4.785-kilometre Circuito Internacional de Vila Real to capture the DHL Pole Position.

“That was probably the lap of my life,” said Michelisz, second in the WTCR / OSCARO standings after 15 races. “There was no margin for me to go any faster. I’m happy with the progress from yesterday’s practice and this one goes to the team.”

Huff found himself bumped down to fourth by the chequered flag, with BRC Hyundai N LUKOIL Racing Team’s Augusto Farfus going second fastest, 0.299s down on the flying Michelisz. “It’s all about commitment at this track,” said Brazilian Farfus. “I tried to build up my pace and got my distance to the walls better. I’m very happy with P2.”

Behind Huff in fifth was Team Mulsanne’s Ma Qinghua despite the Alfa Romeo Giulietta Veloce TCR driver picking up a puncture and reporting himself as sick over the radio at the end of the session.

BRC Hyundai N LUKOIL Racing Team’s Nicky Catsburg made it three Hyundai i30 N TCRs in the top six despite losing his quickest time of the session for hitting an anti-corner-cutting tyre stack. Gabriele Tarquini was another to suffer the same fate and ended up in P11.

Jean-Karl Vernay was the fastest Audi RS 3 LMS driver in P12 in his Leopard Racing Team Audi Sport entry, while #RoadToMalaysia points leader Esteban Guerrieri was down in P19 due to a sensor issue in his ALL-INKL.COM Münnich Motorsport, which cost him two of his planned runs.