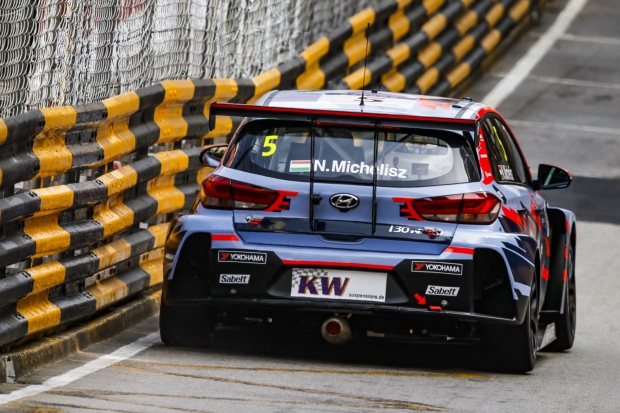 Michelisz had hit the top at Muller’s expense with five minutes of the session left to go with a time of 2m28.729s. But Muller had the benefit of a tow from team-mate and nephew Yann Ehrlacher and snatched back the advantage.

“It was an amazing session,” said the Frenchman. “Anything can happen at Macau. As a team we did a brilliant job. I have to thank my team-mates for the tow, particularly Andy [Priaulx] and Yann, and it was Yann who gave me the tow that made the difference.”

“My lap was quite good, but I missed a last run by a couple of seconds,” said Michelisz. “The front row is still quite good and the race will be interesting, especially the start. I am among three blues...”

Priaulx ended up third fastest, just ahead of Team Mulsanne’s Kevin Ceccon in his Alfa Romeo Giulietta Veloce TCR. Ehrlacher was fifth despite losing some track time with a broken wheelnut, and Thed Björk was next to ensure all four Lynk & Cos qualified in the top six.

Macau maestro Huff was seventh as he chases his 10th race win ono the 6.12-kilometre Circuito da Guia. Michelisz’s team-mate and 2018 WTCR / OSCARO title winner Gabriele Tarquini was next, ahead of SLR Volkswagen’s Benjamin Leuchter, who ended up as the top Macau rookie. PWR Racing’s Mikel Azcona completed the top 10 in his CUPRA TCR.

KC Motorgroup’s Jim Ka To Honda was the fastest of the wildcard entries, his Civic Type R TCR ending up in P27.

The session was briefly interrupted by a red flag with 12 minutes to go when Mehdi Bennani crashed his Volkswagen Golf GTI TCR.