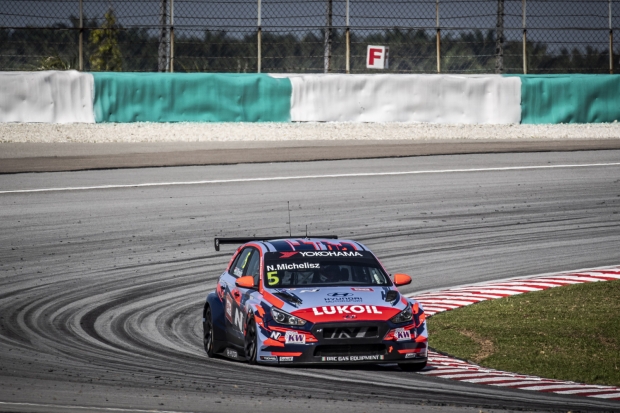 Norbert Michelisz’s domination of the final round of the 2019 WTCR – FIA World Touring Car Cup presented by OSCARO season continued after securing pole position in the DHL Second Qualifying Q3 shootout at Sepang.

Michelisz’s domination of the Sepang weekend means he will start on pole in two of the three races held at the former Malaysian Grand Prix venue, having topped First Qualifying earlier today.

“To be honest, there was not much more in it [in Q3], I gave it my best and twice I was close to crashing into the tyres. But in the end, I managed to build a rhythm, so I am incredibly happy. Now I can smile a bit, I know it is three races but I’m very happy with my performance because we maximised what we have and we scored 10 vital points for the championship,” Michelisz said.

With light rain falling ahead of Second Qualifying and the threat of heavy showers before the Q3 shootout increasing, Michelisz elected to run first on the road for his run, which was just a tenth of a second slower than his fastest time in Q2.

Neither of Michelisz’s BRC Squadra Corse team-mates, Nicky Catsburg nor 2017 WTCR champion Gabriele Tarquini, could match the Hungarian’s time and will line up P4 and P5 for Sunday’s Race 3 respectively.

After struggling with pace in Q1, Guerrieri snuck into the Q3 shootout ahead of the fourth BRC Hyundai of Augusto Farfus but managed to pull a sensational lap out of the bag on the final run, putting the Argentinian second on the grid.

Mikel Azcona will line up P3 and remains in a strong position to challenge for victory in Race 1 and 3 after topping FP2 earlier today. The PWR Racing Cupra driver qualified P4 for Race and will start Race 2 from P7.

Title contenders Yvan Muller and Thed Björk missed out on a place in Q2 of Second Qualifying, with Muller lining up P13 and Björk P19, a slight improvement on his First Qualifying fortunes.

“Since the beginning of the day we struggle with the balance and especially the speed,” Muller explained.

“We are 30kg heavier than the second heaviest car, so that is worth six-tenths here. In these conditions it’s complicated. That costs us a lot over the weekend, but never mind, we never give up. We’ll see on Sunday.”

Their Lynk & Co-powered team-mates Yann Ehrlacher and Andy Priaulx fared little better and will start P18 and P27 for Races 2 and 3 respectively.

Langeveld was the only Audi to make it into Q2, with Gordon Shedden the best of the Lukoil Team WRT drivers in P15, with Jean-Karl Vernay only P20.

Michelisz’s second pole of the day means he extended his points lead over Guerrieri to 15 ahead of the first race on Sunday.

Next up for the #WTCR2019SUPERGRID is the nine-lap Race 1 on Sunday afternoon. All cars run on Yokohama tyres as standard.