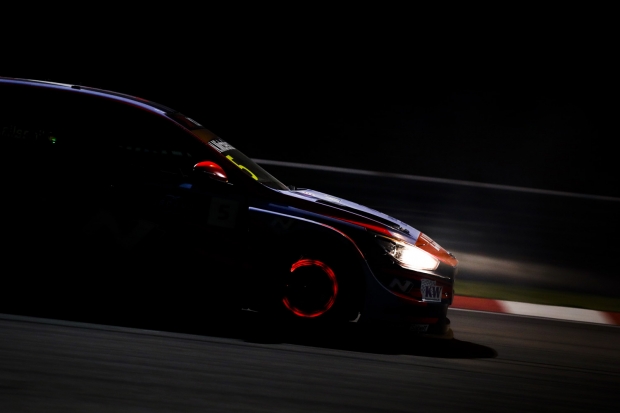 Esteban Guerrieri turned the screw on his battle with Norbert Michelisz for the 2019 WTCR – FIA World Touring Car Cup by OSCARO title by winning a dramatic red flag-interrupted reverse-grid Race 2 at WTCR Race of Malaysia.

The ALL-INKL.COM Münnich Motorsport driver closed to within 10 points of WTCR / OSCARO points leader Michelisz with just Race 3 to come at the Sepang super-finale, after rising from ninth on the grid, in a race run in heavy rain that ended under the floodlights as darkness fell. Race 1 winner Michelisz could only finish eighth.

“Amazing,” said Guerrieri. “I really gave it all. I visualised what would happen in the first lap and it happened. This was the race of my life. The car was awesome and thank you to my team. We are a bit closer and we are still in the fight.”

From the start, ALL-INKL.COM Münnich Motorsport’s Néstor Girolami took the lead from DHL Pole Position man Ma Qinghua at Turn 1, but his team-mate Guerrieri was quickly on the move from ninth – and by the end of the first lap, sensationally he was already in the lead.

But drama behind him forced a red flag race suspension. Heavy rain led to a number of drivers running off the track, including WTCR / OSCARO points leader Michelisz. The safety car had just been called upon when Nicky Catsburg’s BRC Hyundai N LUKOIL Racing Team Hyundai, which had skidded off after contact with Yvan Muller, caught fire after returning to the circuit. Catsburg escaped without injury.

Muller was furious about the contact with Catsburg. “He came from nowhere and I was his target,” said the Frenchman. “There should be a strong penalty, but there will probably be nothing.”

Catsburg held his hands up for the incident. “I was on slicks, he was on full wets I think,” said the Dutchman. “I locked the tyres, I couldn’t stop and I T-boned Yvan. It was fully my mistake and I didn’t do it intentionally. But I understand his frustration.”

The race was restarted with the drivers taking up the positions they held from sector two on that first lap. Incredibly, Catsburg’s mechanics prepared his car to restart despite the fire, but he was not allowed to take his place on the grid because he had received mechanical assistance under red flag conditions.

The new order at the start left Girolami and Guerrieri on the front row, with Muller in fifth on the grid, with fellow WTCR / OSCARO title contender Michelisz – who had dropped down the order from the first start – only in P17, although problems for those ahead promoted him to P13 under the safety car restart. By this time the rain had now set in and darkness had fallen.

From the restart, Girolami inevitably allowed Guerrieri through to lead and he didn’t look back, building a comfortable gap to claim his vital victory.

But there was plenty of action behind him as PWR Racing’s Mikel Azcona and SLR Volkswagen’s Johan Kristoffersson battled hard and overcame Girolami to join Guerrieri on the podium.

Team Mulsanne’s Kevin Ceccon finished fifth in his Alfa Romeo Giulietta Veloce TCR, ahead of Muller who is now out of title contention ahead of the final race.

His nephew Yann Ehrlacher was seventh, with Michelisz content to take vital points in eighth – having originally started in P10. Rob Huff was next, with SLR Volkswagen’s Benjamin Leuchter completing the top 10.